An MMORPG set on Pandora 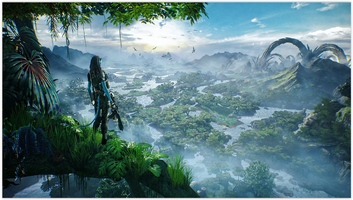 Advertisement
Avatar: Reckoning is an MMORPG where you embark on a trip across space to Pandora, ready to dive into a game based on this saga by James Cameron. On this fictional planet, you'll meet the Na'vi, an alien species facing multiple threats. As you play, you'll get to experience iconic scenes from one of the highest-grossing franchises in film history.

Avatar: Reckoning offers spectacular animation and 3D graphics developed with Unreal Engine 4 technology. Bear in mind that the demands of this engine require a powerful smartphone for the game to run smoothly. That said, this realism makes the game so incredibly immersive.

Before you begin, you can customize your Na'vi character. Once you've completed this step, you can start exploring Pandora and go on adventures. But be careful because as you discover new areas of the map, you'll also encounter enemies and enter into intense fights.

To move your Na'vi, tap on the virtual D-pad, and to use your weapons, tap the action buttons. As you level up, you can unlock more powerful weapons to help you destroy various monsters. You can even use telescopic sight to spot enemies far in the distance.

Avatar: Reckoning immerses you in the Avatar universe, where you can go on new adventures in which the Na'vi, humans, and monsters face each other in ruthless battles. Use your weapons to your advantage as you complete missions and make your way through each area of Pandora. When all is said and done, the survival of this alien species is in your hands.
Reviewed by Carlos Martínez Translated by Taryn

An additional 4 GB download is required.
The server created for the CBT may not accept new sign-ups.
Advertisement

There are opinions about Avatar: Reckoning yet. Be the first! Comment

Genshin Impact
An open-world RPG with spectacular graphics
One Piece: Fighting Path
A unique adventure in the One Piece world
Brawl Stars
3-on-3 battles from the creators of Clash Royale and Clash of Clans
League of Legends: Wild Rift
The MOBA king deploys its arsenal on Android
LifeAfter (Global)
Cling to life in a hostile world
Angry Birds Epic
Join the Angry Birds on their most epic adventure